Hyogo is a prefecture located in the Kansai region of Japan, on the largest island of Honshu.  Kobe is the capital city of Hyogo and is a popular costal city located to the west of Kyoto and Osaka.

The only significant airport in Hyogo is Kobe Airport and this receives flights from a limited variety of domestic destinations.  However, due to its proximity to Osaka prefecture, its possible to use one the of the two larger airports, Kansai International Airport or Osaka Itami and make a short journey on the ground to reach Hyogo for a golf trip.

There are many scenic areas to enjoy when planning a Hyogo golf holiday including Seto Inland Sea National Park, San-in Kaigan Coast National Park, Mount Rokko and Awaji-shima Island, all of which are within easy reach of the capital city, Kobe.

Hyogo is also home to one of the most impressive pieces of architecture in Japan, Himeji Castle.  This is found in the city of Himeji and is a UNESCO World Cultural Heritage and is regarded as the finest surviving example of prototypical Japanese castle architecture.

However, the main reason you are travelling to Hyogo is the golf and there are some excellent courses on offer in the prefecture. 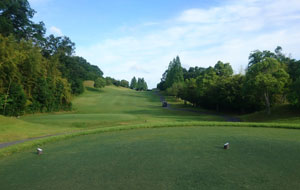 Ark Yokawa Golf Club is a very popular golf course owned and operated by PGM which around 45 minutes from the centre of Osaka and if you take the Chugoku Expressway it’s a few minutes from the Yoshikawa Interchange. AS a result of its proximity to the city the courses can get very crowded at weekends.

The course winds its way through the gently undulating terrain without too many elevation changes.  As the courses is quite flat and the fairways reasonably forgiving, the main defence are the many strategically placed bunkers and several ponds and other water hazards.

The par 3, 2nd hole is interesting with a pond protecting the front of the green and two bunkers waiting if you over club. The par 4, 5th hole is another interesting challenge as the fairway narrows as you approach the green with a pond to the right of the fairway.  As you make your way home the part 5, 13th is long and narrow and demands great accuracy as well as distance.  The 15th is another par 3 protected by a pond and the round ends with a long par 3 – no water this time but the green is well bunkered. 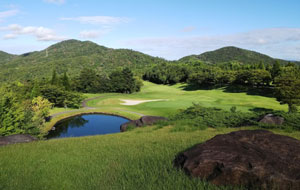 Dai-Takarazuka Golf Club is one of the oldest golf courses in the area daring back to 1926 when it started life as part of a sports club attached to a hotel.

The course has 36 holes and each of the nines has a different name – the most interesting holes on the Takarezuka nine  is the par 4, 2nd with its small, heavily guarded green which requires great accuracy.  The 8th is a driveable par 4 with a large pond in front of the green. The 3rd hole on the Nishinomiya nine is a difficult par 3 with OB along both sides and bunkers protecting the right side of the green.  On the Ashiya ninethe 4th hole is a severe dogleg par 4 which is followed by a straightforward par 3.  The 9th is a long par 5 with narrow fairways.  The Rokko nine is probably the easiest of the four with no water hazards and fewer bunkers. 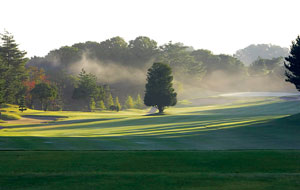 Designed by Robert Murashima the course enjoys 27-holes with a total par of 72.

The course has a rather interesting concept in that it has 2 greens for each hole which is actually a fairly good idea for preserving and maintaining the greens to the highest possible standards throughout the season.

Each 9-hole loop offers a different challenge and cater for every level of golfer, while still being enjoyable for all. 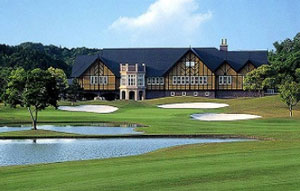 The Rokko Course, part of the Taiheiyo Club is an example of how golf courses should be designed.

An exquisite “tudor-style” mansion clubhouse is ready to welcome you with open arms and a delectable smile from staff.

Beautifully decorated the clubhouse offers both members and visitors a complete service, with bar and restaurant facilities catering for your culinary needs before or after the round. Plush locker-rooms and a well-stocked pro-shop complete the clubhouse experience.

Once onto the course the quality continues, with knowledgeable caddies on hand to offer advice and a course presented to the exacting standards demanded by the Taiheiyo group. 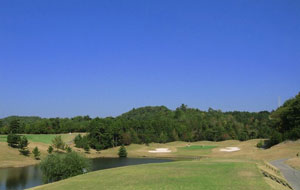 Set in an incredible 1.48 million square metres the Taiheiyo Takarazuka Golf Course is a wonderful design by Tomikatsu Kato.

Opened in 2001 the 6823-yard par 72 course has quickly gained recognition for its design and high standard of course maintenance.

Set on the gently sloping hillside, amongst native forests each hole enjoys panoramic views of the immense jungle from which the course was created.

Picturesque at every turn, a golfer can be excused for getting distracted with the stunning natural beauty that surrounds the course but look closely and you will be even more appreciative of the intricate and intelligent design of the course which demands concentration from start to finish. 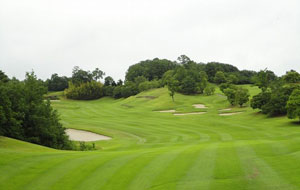 One of the many great aspects of playing golf in Japan is the various locations you visit in the country.  Yokawa Country Club is located in Miki, which is a city in the Hyogo Prefecture of Japan.

The closest major city to Miki and Yokawa Country Club is Kobe and it takes just 45 minutes to reach the golf course from the city centre.  Kobe Airport only handles domestic flights but it is possible to fly to Tokyo or Osaka from international destinations and make the short trip from there.

There is a great choice of budget golf courses in Pattaya, making it the perfect place for a golf holiday in Thailand.
Read More