There are many Asian countries which have become very popular for golf holidays.  Thailand and Vietnam have emerged as great places to enjoy a round of golf but other Asian countries are also developing fantastic golf courses.

One Asian country which has produced some excellent golf courses is Sri Lanka.  Here you will find a wide range of different golf courses to enjoy and the country is full of pleasant surprises, both on and off the golf course.

Boasting diverse landscapes, a combination of ancient and modern architecture plus stunning sandy beaches, Sri Lanka is one of the best places in Asia for a golf holiday.

Sri Lanka is an island nation based in south Asia.  Separated from the Indian subcontinent by the Gulf of Mannar and the Palk Straight, Sri Lanka is found in the Indian Ocean, to the southeast of the Arabian Sea and southwest of the Bay of Bengal.

Legend states that it was once possible to cross from Sri Lanka to India via a stone bridge but all that is left of the bridge is the top of the stones which are visible above sea level.  The only major mountains in Sri Lanka can be found in the south central region of the island, with the highest point being Pidurutalagala, which stands 8,281 feet above sea level.

In addition to coral reefs, Sri Lanka has a large mangrove ecosystem which comprises over 7,000 hectares.  Much of the island is made up of flat, rolling coastal plains and Sri Lanka is home to over 100 rivers.  Thanks to the huge volume of waterways, there are many waterfalls to admire in Sri Lanka, with Bambarakanda Falls being the longest at a height of 863 feet.

The first settlers in Sri Lanka are reported to have arrived from India in 500 BC and were called Sinhalese.  Sri Lanka was divided into four states and it was a man called Dutthagamani who brought them together as one kingdom.

Dutthagamani was a strong ruler and created great palaces and temples between 161 and 137 BC.  Between the second and fourth centuries AD, Sri Lanka began to trade with other countries including India, Persia, China and Ethiopia and this made them a rich country.  However, the wealth did not last long following several invasions from India.

The Tamils settled in the north of Sri Lanka and by 1505 the Portuguese arrived.  In 1636 King Rajasinha of Kandy received Dutch envoys who ruled in the country until the British took over in 1796.  The British built roads and made English the official language before abolishing slavery in 1884.

Coffee growing started in the early 19th century and Hinduism and Buddhism were revived towards the end of the century.  Sri Lanka became independent on 4th February 1948.

Today, the country relies on the production of tea, rubber and coconuts plus the tourism industry, which combined with golf has become big business.

There are many different religions practiced in modern day Sri Lanka.  However, close to 70% of the population are Buddhist, with the school of Theravada being the most prominent.  Hinduism is the second most popular religion in Sri Lanka and is practiced in the eastern, central and northern areas of the country.

Hindu makes up the religion of 13% of the population in Sri Lanka, with Islam the third most popular at 10%.  Islam is thought to have arrived on the island from Arab traders and many of the local believers are thought to be descendants of the traders.

Completing the religious make-up of the country is the Christian religion, which as been adopted by 7% of the population.  Western colonists first introduced Christianity in the early 16th century and many are thought to have come from the Portuguese.

The climate in Sri Lanka is tropical and the weather remains warm throughout the year.  This makes it ideal for playing golf at all times of the year.  However, understanding the monsoon season will help a lot when planning your Sri Lanka golf holiday.

As you can see, it’s possible to visit different areas of Sri Lanka at different times, making it suitable for golf any month of the year.  December to April is considered the peak season for tourism in Sri Lanka, so if you want to avoid the crowds you are advised to book your Sri Lanka golf holiday at a different time.

As with visiting any country, if you are travelling abroad for a golf holiday you should always ensure you have a valid passport which has at least 6 months to run until the expiry date and at least one blank page.

If you have a British, Canadian, US or Australian passport, you will require a return travel ticket and a visa to visit Sri Lanka for a golf holiday.  You can apply for a visa on the internet using the Electronic Travel Authorization System, known as ETA.

All passports for members of the EU also require a visa to visit Sri Lanka and you are advised to plan as soon as possible before travelling although you can get one upon arrival.

Always check with your local government and that of Sri Lanka before applying for a visa to see if anything has changed.

Tipping is very important in Sri Lanka and some of the wages are very low for people working in the services industry.  Tips can go a long way in making up peoples’ wages.

That’s not to say you are expected to tip someone if they provide a bad service but most people in Sri Lanka are polite, helpful and hard working.  If you are staying in a hotel during your Sri Lanka golf holiday you can tip as you go along or at the end of your stay.  You can tip as much as you like depending on how happy you are with the service.

A 10% service charge is usually included at restaurants but at small places this is not always the case, so always check before leaving if you are not sure.  Tips are not necessary for taxis or tuk tuks but are very appreciated when given.

You have several options for travelling around Sri Lanka during a golf holiday.  Trains from Colombo reach all the tourist towns in Sri Lanka but first class carriages can be limited on some journeys. Fast services operate on the main routes and the service between Colombo and Kandy is quick.

Buses in Sri Lanka are provided by the Sri Lanka Central Transport Board are regarded as the easiest and most convenient way to travel around the island.  Most buses are air conditioned but if you have your golf clubs, you may decide to opt for a taxi.

Official taxis have yellow tops and red and white plates.  Most taxis are metered but you can agree on a price before you leave, especially for longer journeys.

While tuk tuks may not be the best way to travel if you have luggage and golf clubs, they can be a fun way to get around.  They provide a good way to get between short distances and you must agree a fare before you start the journey.

If you would rather have access to your own vehicle during your Sri Lanka golf holiday, many of the top international car hire companies are available at the airport in Colombo. 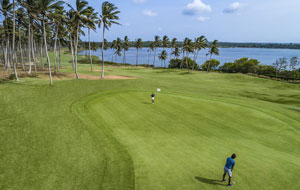 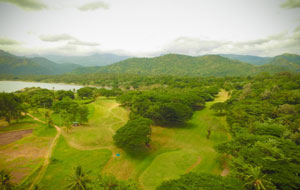 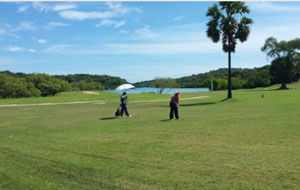