Malacca or as it is often known Melaka is one of the oldest and most historic cities in Malaysia with one of the largest Chinese communities outside China.  It is becoming increasingly popular as a golfing destination and boasts a number of wonderful golf courses.  If you are planning a golf holiday in Malacca then you should take time out to visit some of the historic sites which include the iconic and red-walled Stadhuys which is one of the oldest Dutch buildings in East Asia.  You should also visit Porta De Santiago to see the ruins of A Famosa which has also lent its name to one of the local golf courses.  Malacca is home to the Straits Chinese and you should definitely visit the the Baba and Nyonya Heritage Musuem and sample some of their wonderful local cuisine.

Located midway between Kuala Lumpur and Malacca this is a 27-hole resort course with plenty of other facilities and attractions as well as the golf course.  Takes around one hour to reach from Kuala Lumpur and has the reputation of being one of the better maintained golf courses in Malacca.  The three nines are named Rocky, Palm and Crocodile although hopefully you won’t encounter any as you make your way around. The opening hole on the Palm Course is also the signature hole with an unusual island tee box requiring along water carry to the fairway and a well-protected green. AS you stand on the 2ned tee box of the Rocky nine you understand where the course got its name as it is surrounded by numerous boulders.  The Crocodile Course is the most popular courses here and offers great views over the resort and surrounding area

One of the oldest golf clubs in Malaysia which opened for play in 1964.  The course was carved out of the local jungle and is one of the most attractive courses in the area with its mature trees and natural surroundings.  The courses designers has tried to minimise the effect on the local wildlife and as a result you can also enjoy and will see numerous species of birds, monkeys and monitor lizards. The courses originally consisted of two nines known as Tunku's Nine (2nd nine) and Ghaffar’s Nine (3rd nine). The third nine, Governor’s Nine was built in 1995.  The course gets its name from  the Ayer Keroh Lake which bisects the course and come into play on many of the holes.

Located south of Malacca close to the Johor border, Gemas Golf Resort is an easier golf courses so ideal for higher handicappers and beginners and is easily reached from both Singapore and Kuala Lumpur.

Plenty of elevation changes at this golf course which is around 25 minutes form Malacca and has a reputation of being one of the more difficult and challenging courses in Malaysia.

A wonderfully natural location as it winds its way through the virgin Malaysian jungle with monkeys lurking nearby ready to steal the remains of your lunch.  This 27-hole course is great for golfers of all standards and offers a real escape from the city and back to nature experience. 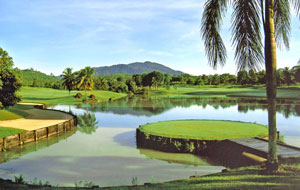 Named after the 16th Portuguese fort of Malaka A´Famosa and set in 1300 acres of natural lush terrain the A´Famosa Golf Resort is located close to the Malaysian Capital City of Kuala Lumpur.

Within the “entertainment” resort sits the 27-hole golf complex. The design by Ross Watson is exquisite and none of the holes on the golf course will disappoint you. The entire complex flows beautifully with gentle undulations and mature trees which blend seamlessly with the water hazards and rocky outcrops. 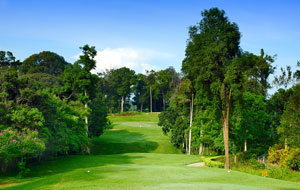 Located just 10 minutes from the North-South motorway you will find the Ayer Keroh Country Club.

Originally opened for play in 1964 the course had just two nines, Tunku´s Nine and Ghaffar´s Nine. Designed by then Chief Minister of Malacca Tun Dr Abdul Ghaffar bin Baba, the course was cut out of the virgin jungle. It was part of the design philosophy to maintain as much of the natural jungle as possible and in doing so the designers have created a golf course with an abundance of natural wildlife. 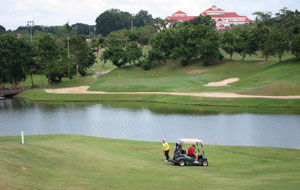 Malaysia is home to some of the best golf courses in Asia and Orna Golf and Country Club sits firmly in that bracket.  Located close to Malacca, the capital city of the coastal state of Malacca, in southwestern Malaysia, you can easily reach this golf course from anywhere in the world.

Malacca International Airport is just 10 kilometres from the city centre and no more than 30 minutes from Orna Golf and Country Club.  Upon landing at the airport, you could be on the golf course within an hour.

If you decide to base yourself in the centre of Malacca, you have just 20 kilometres to travel to Orna Golf and Country Club, making it very accessible from the city and a great addition to a Malaysia golf holiday. 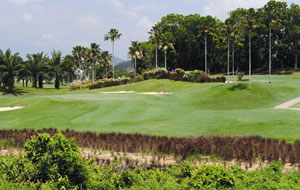 Tiara Malaka Golf and Country Club is ranked 14th in the Top 100 Golf Courses of Malaysia and it is not hard to see why it is so highly regarded.   The clubhouse is not as modern as some courses in the area but it more than adequate for the needs of visiting golfers.

Designed by Nelson and Wright the complex boasts 27 holes of varying difficulty and design, making this the perfect destination for golfers of all ability levels.