Fukuoka prefecture is situated in northern Kyushu, which is one of Japan’s four main islands.  It faces the sea on the three sides, with the Sea of Suo to the northeast, the Sea of Genkai to the northwest, and the Sea of Ariake to the southwest.

The capital city of Fukuoka prefecture is Fukuoka and this is the location of the airport and the starting point of many Fukuoka golf holidays in Japan.  It’s also possible to reach Fukuoka from the larger island of Honshu thanks to the Kanmon Tunnels and Kanmon Bridge.

The region of Fukuoka is home to a variety of seasonal flowers including red and white plum trees and irises.  These make for some spectacular sights on the golf courses in Fukuoka when in full bloom.

Some of the major attractions in Fukuoka include Senbutsu limestone cavern, which is one of the natural treasures of Japan and features stunning stalagmite and stone pillars.  Moving from a natural attraction to something man-made and Space World was the world's first space theme park and remains very popular with locals and tourists alike.

If you time your Fukuoka golf holiday right, you can enjoy the Hakata Dontaku which is a colourful port festival held annually in May.

Golfers will find the two golf courses in Fukuoka a pleasure to play and both Aso Iizuka Golf Course and Wakamiya Golf Club are easy to reach, wherever you decide to stay in the prefecture. 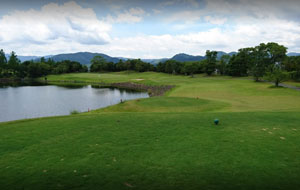 Aso Iizuka Golf Club is a semi-private members club that exudes class and demands exacting standards from both guests and members alike.

The large, imposing clubhouse requires a jacket to be worn at all times, and the traditional style is a throwback to some of the private clubs of the UK and USA.

A superb restaurant serves incredible meals which can be enjoyed on the large terrace overlooking the course, offering a wonderful environment to unwind after your round.

Considered to be the Championship route the White and Blue course combine to give a challenging 7042-yard course that winds through the tall, majestic trees that line the fairway. 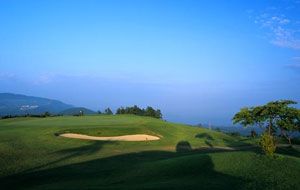 Beppu Golf Club is a very old and historic golf course and was the second golf course to be built in Kyushu in 1930.  On a clear day you can get great views of Haruka-Shikoku and Bungo Channel.

The course is a fairly typical Japanese layout with wide tree-lined fairways and many of the holes are gentle doglegs either to the left or right.  The Tsurumi Course is quite hilly with plenty of elevation changes and you generally get a good view of the holes from the tee box.

The Yufu course has views overlooking the Kuju Mountains. The 2nd hole which is a sweeping downhill par 5 is the best vantage point to see the views.

The course has automatic golf carts which means that you cannot enter the fairway. 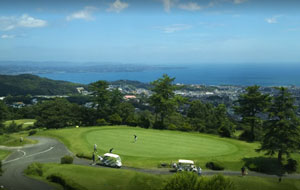 Beppu Ogiyama Golf Club has been built on the lower slopes of Mt. Ogiyama and offers wonderful views over Beppu Bay.  The course designer has used the natural terrain when constructing the courses so you can expect plenty of elevation changes an uneven lies.

The inward nine criss-crosses the beautiful Uchiyama Valley with several dogleg holes with strategically placed bunkers lying in wait to catch the wayward drive.  You will also need to be careful of the Tanigawa River which bisects the fairway on two of the holes. 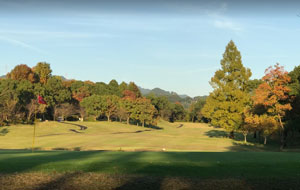 Fukuoka Century Golf Club is quite a challenging course and you can expect to use most of the clubs in your bag and you will need a strong iron game to score well.

The opening holes on the outward nine have quite narrow landing areas so you need to think twice about taking out your driver.  The 5th is quite a challenging par 4 with a large bunker on the right of the fairway as you approach the green.  The par 3 8th also looks tricky with a water hazard protecting the front of the green.

Water comes into play on several of the holes on the inward nine although this should not cause too much problem unless you are very wayward.  The 15th ahs water over the back of both greens and if you are playing to the left green it is almost completely surrounded by water. The finishing hole which is a par 5 is a potential card wrecker with a narrowing fairway as you get close to the green with water both sides. 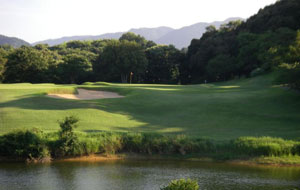 Fukuoka is a prefecture on Japan’s Kyushu Island and home to some excellent golf courses, one of which is Fukuoka Kokusai Country Club. This golf course was established in 1969 and boasts 36 holes, making for two 18-hole golf courses. Fukuoka Kokusai Country Club is located about 30 minutes by car from both Fukuoka and Kitakyushu cities and can be easily reached from the Wakamiya Interchange off the Kyushu Expressway.

Fukuoka Kokusai Country Club plays host to many events including the Yakult Ladies Tournament which is an annual tournament contested on the golf course. All 36 holes are known for their undulating fairways and testing greens, but the fairways are often wide and this makes using the driver off the tee a pleasure on most longer holes. 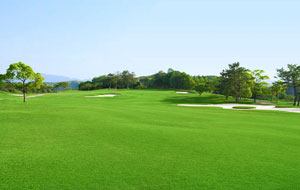 Fukuoka Lakeside Country Club Is just under an hour away from Fukuoka City in Japan. It is situated in-land and can also be comfortably reached from Kitakyushu, making both places ideal for accommodation when playing golf in this region of the country. 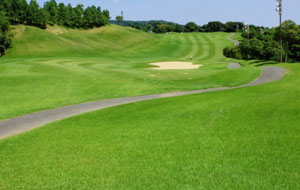 For those who get nervous about playing around or over water, Moon Lake Golf Club Kurate Course is ideal as there is very little in the way of water hazards throughout the 36 holes. In fact, water only comes into play on five of the 36 holes, four of which are on the East and Center courses. The overall distance of the course does not vary greatly whichever two sets of 9 holes you decide to play. 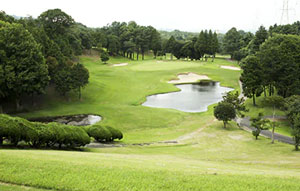 Oita Fujimi Country Club is quite a hilly course with great views of Mt. Takasaki as you make your way around the golf course.

The front nine is the easier and more relaxing side of the course with not too many challenges although be careful with your approach to the second as the green is surrounded by bunkers. The 4th is a shortish par 3 but you need to negotiate a pond and the bunker to reach the putting surface safely.

The inward nine is a bit more challenging as the holes are slightly longer and water comes into play off the tee on the 11th and 15th holes. The par 3 17th hole is also tricky as an slice will take your ball into the ravine which runs along the right hand side.

They have recently installed markers to help you judge the distance to the green and GPS navigation in the carts which will give you all the information you need to choose the right club. 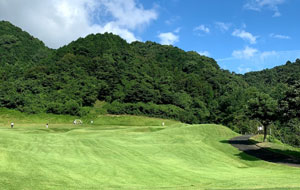 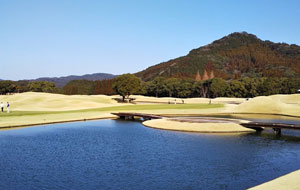 Wakagi Golf Club is another great golf course designed by Desmond Muirhead and it is one of the most famous golf courses in Kyushu and some have described it as reminiscent of a Japanese landscape painting.

A pretty easy start to your round with a gentle par 4 with a wide-open. The third hole is a very attractive par 3 with the river running along the right-hand side. As you approach the first par 5you need to be very accurate off the tee as the fairway is extremely narrow and  this is followed by two dogleg par 4’s -  one bending to the right and the other to the left with bunkers lying in wait should you drift off line. The ninth hole which is a par five is a potential card record with water all the way along the right-hand side and almost all the way along the left-hand side so there is no margin for error. 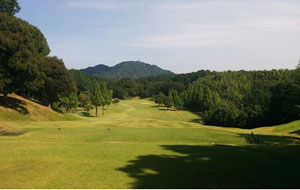 The two-storey clubhouse sits in harmony with the surrounding wooded mountains and is unimposing.  The locker rooms, a well-stocked pro-shop and great dining options complete the clubhouse facilities.

Well-designed the course caters for all golfers and ensures that everyone can enjoy a wonderful round of golf in stunning surroundings.

With the mountain landscape the course has slight elevation changes that create a superb mix of hole styles and superb backdrops of colourful native trees offer beautiful scenic views and aesthetically pleasing holes.