Siem Reap is perhaps best known as the gateway to the Angkor Archaeological Park but has enjoyed a great deal of development in recent years and is now a great place to stay for a Cambodia golf holiday.

What was once a small village has become a major tourist destination and this is good news for those wanting to play golf in Siem Reap, as the options are constantly growing and improving.  That applies to both the hotels and the Siem Reap golf courses.

The enjoyment of a golf break in Siem Reap not only comes from playing the excellent golf courses but also the tremendous architecture, culture, food and people.  A golf holiday in Siem Reap is one which is guaranteed to live long in the memory.

Siem Reap is the capital city of the province which goes by the same name.  Siem Reap province is in the northwest of Cambodia and is made up of a grouping of small villages along the Siem Reap river.

Tourism plays a huge role in the Siem Reap economy and visitors coming to the city to play the golf courses add to the tourism industry.  Over 50% of the jobs in Siem Reap are tourist based and this highlights how important visitors are to this region of Cambodia.

For some, playing golf in Siem Reap may not have been a major consideration but this is a place which is geared up for visitors who want to enjoy the sights and play golf.  In 2012, Siem Reap welcomed over two million tourists and this number continues to grow.

Getting around in Siem Reap on a Golf Package

Siem Reap province is 10,000 square kilometres and arguably the most famous province and city in Cambodia.  It's located in the Northwest of the country bordering with Oddor Meanchey in the north, Preah Vihear in the east, Kampong Thom to the West and Banteay Meanchey to the South.

For those travelling to play golf in Siem Reap from a different country to Cambodia, you will likely arrive via plane at Siem Reap International Airport.  This is the second largest airport in Cambodia and there are different terminals for international and domestic flights.

Some of the major airlines serving the airport include AirAsia, Bangkok Airways, Chine Eastern Airways, Malaysia Airlines and Vietnam Airlines.  There are no direct flights to Siem Reap from the United States of America or Major European countries such as the United Kingdom and France.  However, with stop overs including Singapore and Bangkok, why not combine one of these places with Siem Reap to create a multi-destination golf holiday?

Siem Reap International Airport is 7 kilometres from the city and you can take a prepaid taxi ride, with your golf clubs if you have them, for around $12.  The prepaid booth is located outside the terminal but some hotels will also offer a free shuttle service.

Best Time to Visit Siem Reap on a Golf Tour

The best time to travel for a golf holiday in Siem Reap is between November and March, as this sees the driest period of the year.  As Siem Reap has a tropical dry and wet climate, the temperature remains hot throughout the year, with average high temperatures rarely dropping below 30 degrees.

The wet season can last for between seven and eight months.  May is still a good time to play golf although June, August and September are best avoided if you want the best chance of making it onto the golf courses of Siem Reap without rain getting in the way.

However, Siem Reap is not directly affected by tropical storms and the rain which does arrive in the region helps to create the top-quality golf courses.

You should allow yourself some time away from the fantastic golf courses of Siem Reap to see some of the other sights in this area of Cambodia.

Angor Wat is considered a must-see when staying in Siem Reap and is the main reason many tourists flock to the city.  The complex has five lotus towers which stand 65 metres tall and was constructed to worship the Lord Vishnu.  The 12th century Khmer architecture features roughly 2,000 stone carvings of Apsaras and is listed as a UNESCO World Heritage site.

Despite Siem Reap being famous for Angor Wat, there are other architectural delights in the region, one of which is Ta Prohm Temple.  This monastery was built during the mid-12th century by King Jayavarman VII in commemoration of his mother and the walls and doorways which remain have been gripped by large trees and vines and this adds to the stunning appearance of the temple.

Away from the temples, to feel a part of local life in Siem Reap, head to Tonle Sap Lake.  The lake is home to an abundance of wildlife, including fish, snakes, crocodiles and birds.  Between June and November, the floating village is in place.  The village becomes a hive of activity during these months and if you are playing golf in Siem Reap in November, take the time to visit this fascinating place.

If you are looking for a place to enjoy a drink after a round of golf in Siem Reap, head to the aptly named Pub Street.  This street is home an abundance of bars, cafes, pubs, restaurants and clubs.  The street is closed to vehicles after 5pm and you can wander freely before settling down for a drink and discussing the days golf or sightseeing.

A Siem Reap golf package would not be complete without a round of golf at Angor Golf Resort.  This golf club is ranked as being not only the best golf course in Siem Reap but the top golf course in Cambodia, which is some statement given the quality and variety of courses available in the country.

Angor Golf Resort was designed by Nick Faldo and opened for play in 2008.  The opening of the course was made famous when the multi-major winner received a blessing from local monks and the golf course has flourished ever since.

The golf course is managed by IMG and as one would expect from a course under the care of this company, the greens, fairways and tee boxes are always in tremendous condition.  The Paspalum turf aides in the conditioning of the course and means Angor Golf Resort is always in great shape and open all year round.

The water and bunkers are well placed and make Angor Golf Resort a good test for golfers of all abilities, where strategy and accuracy play just as big a part in a round as good distance.  There are enough undulations on the greens to make putting tricky but there is nothing hugely difficult and well-thought our approach shots leave good opportunities for birdies.

The final three holes at Angor Golf Resort are regarded as the most challenging but are also great fun to play.  They include a par-3, par-4 and par-5 and water comes into play on each of them, making good accuracy a must to avoid dropping shots.

The modern club house makes for a pleasant place to enjoy a local or international dish following a round of golf and combines with the course itself to make Angor Golf Resort a fantastic golfing experience in Siem Reap.  It’s little wonder this course has won the Asian Golf Monthly award for the best course in Cambodia and a nomination for the Top 3 Maintained Courses in Asia.

Water features on all but one hole at Phokeethra Country Club and the signature double carry on the 18th hole to the island green is a great way to finish an exciting course.  Both the fairways and greens are generous and the par-4 and par-5 holes will have you reaching for the driver but with water and sand traps situated around the course, you cannot afford to be too wayward when driving or approaching the green.

Look out for the restored Roluh bridge between holes 9 and 10, which is a great example of Cambodian history at Phokeethra Country Club.

The course is kept in good condition all year round and the pitch and putt area is a good place for practice before heading to the first tee.  The off-course facilities at Phokeethra Country Club are of a high calibre, with the Angkor Wat restaurant serving Western, Khmer and Asian dishes plus the shower and spa facilities provide a great place to refresh and relax after an exciting round of golf.

The final option for playing golf in Siem Reap is the well maintained Siem Reap Booyoung Country Club.  This is the latest addition to the selection of golf courses in Siem Reap and opened in 2009 having taken a year to construct.

The course was designed by Japanese golf course designer Kentaro Sato and no expense has been spared thanks to the $150 million US dollar budget.  There are several luxurious villas surrounding the course and Siem Reap Booyoung Country Club has played host to some big tournaments and guests, including the Cambodian prime minister.

The fairways are generous and you will be looking forward to getting out the driver on the first holes of both the front and back nine, which interestingly start with a par-5.

However, the toughest holes at Siem Reap Booyoung Country Club are the par-4’s, especially the 9th and 18th holes, meaning concentration must be maintained until the final shot.  There are meandering creeks which cross some of the holes and many of the greens are well protected by bunkers, making accuracy on approach shots key to a low score.

With several holes built using split fairways, you are given an attacking and conservative option which is good but can also lead to indecision, so always be clear in what you want to do before playing your shot.  The greens are large and this makes hitting them relatively easy but if you are away from the pin, a long putt awaits.

The clubhouse makes for an imposing structure amongst the surrounding rice fields and is home to a good restaurant serving local and Korean dishes and the saunas are very refined and make for the perfect place to unwind after a round. 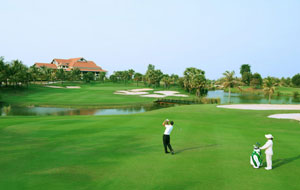 6 Nights / 4 Rounds
From: US$950
There is not better way to get a true feel of a country than enjoying a golf holiday and the Cambodia golf experience has it all. This tremendous Cambodia golf holiday will show the best of the golf courses in the country plus the top citie. Read more...
Details 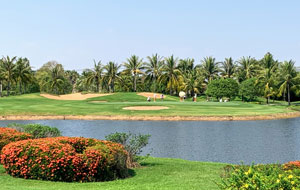 4 Nights / 3 Rounds
From: US$ 635
Siem Reap is becoming well known to tourists around the world and is the entry point to the famous ruins of Angkor.  However, there is much more to Siem Reap than the ruins and the region is fast becoming a hot spot for golf in Asia. T. Read more...
Details 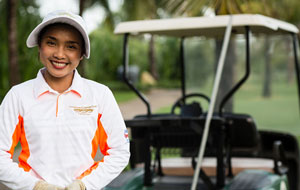 2 Nights / 2 Rounds
From: US$385
Siem Reap becomes well known to visitors all over the globe and is the point of entry to Angkor's renowned ruins.  Siem Reap is much more than the ruins, however, and the region is rapidly becoming a golf hot spot in Asia. Thanks to it. Read more...
Details 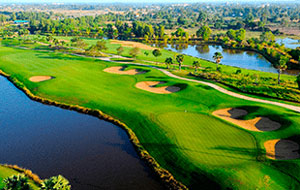 3 Nights / 3 Rounds
From: US$540
Siem Reap is becoming well known to tourists around the world and is the entry point to the famous ruins of Angkor.  However, there is much more to Siem Reap than the ruins and the region is fast becoming a hot spot for golf in Asia. T. Read more...
Details