There are many tremendous Asian destinations for a golf holiday and new, upcoming places are emerging in this fascinating continent.  One of those places is Kuching, a division in the Malaysian state of Sarawak, which is on the island of Borneo.

The capital city of the division is also called Kuching and is a diverse mix of old colonial buildings and modern towers.  As a first-time visitor arriving in Kuching for a golf holiday, you are in for a real treat and something different to what you have experienced in the past.

The island of Borneo may not be the first place which springs to mind when booking a golf tour but its an excellent place to play golf.  Not only that, Kuching and the surrounding area is home to a wealth of history, attractions and wildlife.

You are guaranteed the golf holiday of a life time in Kuching.

Kuching lies on the banks of the Sarawak River in the north-western part of Borneo.  The river splits the city in two and it is divided into the north and the south.  The city starts at Kuching International Airport in the south and stretches to the northern coast of the Santubong and Bako peninsulas.  From the west the boundary is the Kuching Wetlands National Park and it extends to the Kuap River estuary in the east.

The Kuching division is one of twelve in Sarawak and there three administrative districts within the division called Kuching, Bau, and Lundu.  Kuching is the most populated division in Sarawak and is home to over 700,00 people.

There is a multi-cultural city, lush tropical jungle and stunning coast line to explore while enjoying a golf package in Kuching.

Despite being named an international airport, Kuching International Airport only serves two destinations outside Malaysia which are Pontianak in Indonesia and Singapore.  You can also get connecting flights from the Malaysian capital, Kuala Lumpur.  So, why not combine one of these three places with Kuching to create a superb golf tour?

Things to do Away from the Golf Course

You cannot book a Kuching golf holiday and leave without having visited Bako National Park.  This is the most accessible way to enjoy a taste of the Borneo rainforest as it is just 30 kilometres from Kuching.

Even if you do not want to venture deep into the forest, you can use the boardwalks around the visitor centre.  These trails often produce great wildlife viewing and you will see the proboscis monkeys, with their large nose among other wonderful animals.  You can even book a guided tour including a boat ride.

If you want to get up close and personal with Borneo wildlife, you can at Semenggoh Wildlife Rehabilitation Centre.  Home to Borneo's endangered orangutans, you can participate in feeding and take photos of the animals.

Kuching waterfront is a great place to spend time, at both day and night.  There are many small stalls and carts selling snacks, drink and handicrafts plus there is often live music from local buskers.  If you are there early evening, taking one of the sunset river cruises is highly recommended. 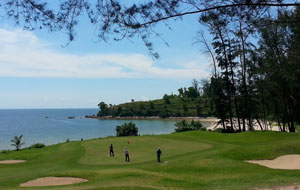 Damai Golf & Country Club, an international standard championship, 18 hole, par 72 course featuring Mountain 9 and Ocean 9 that are exceptionally different in character. The setting is absolutely impressive, bordering the foothills of Mount Santubong and the beaches, rocky outcrops and mangrove forests of the South China Sea. Damai Golf & Country Club can cater to golfers with different caliber.

The ocean nine is the first nine, both spectacular and breathtaking, hugging the South China Sea, fringed by mangrove swamp forest, rocky outcrops, scenic fairways and beautiful beaches. The idyllic Satang Island and the coastlines form the backdrop.

The mountain nine is the second 9 offering challenging golf in a rugged, natural rainforest setting, FOLLOWING THE CONTOURS OF Mount Santubong's foothills, with the mountain providing a spectacular backdrop for most of the fairways.

The distinctive factor of Matang / Santubong 18 is its mountain range, as the name suggests. Here is where golfers can play the game while enjoying the view of the Santubong and Matang ranges. From the golf course, the magnificent view of the mountains can be seen from a distance, giving the golfer an absolutely incredible experience that covers some of the most challenging obstacles in the game.

Meanwhile, towards the northern section, the Siol / Demak 18 is a par-72 championship course. It is not as long as the Matang / Santubong 18, which is designed to offer golfers some water hazards, narrow fairways and water ponds that will surely test their skills and techniques.