Ibaraki is a Japanese prefecture located to the northeast of Tokyo, bordering the Pacific Ocean.  The prefecture is inside the Kanto region of Honshu island, the largest of Japan’s four main islands and the capital city is called Mito, which differs from some prefectures in Japan where the capital city and prefecture share the same name.

There is a new airport in the region called Ibaraki Airport and this was opened in 2010.  The airport is in city of Omitama, central to the prefecture and just 40 minutes from Mito by bus.  Flights are currently limited to just a handful of destinations including Kobe, Sapporo, Naha-Okinawa, Seoul and Shanghai.

However, with the major airports of Tokyo being just 85 kilometres away, its easy to plan an Ibaraki golf holiday and use the capital of Japan as a starting point.

Ibaraki prefecture is home to the second largest lake in Japan, Kasumigaura and this is worth a visit when staying in the area op cruise and fish.  Ibaraki is divided into three main parts, the area containing the Tone-gawa River, the mountainous north and the centre-to-south stretch of the Kanto Plain.

Away from the golf courses, visitors often take in the Fukuroda Falls, which is one of the three most renowned waterfalls in Japan.

There are only two golf courses in Ibaraki but both offer a fantastic round of golf.  The Oarai Sherwood Course is part of the famous Taiheiyo Club family and Windsor Park Golf and Country Club is a unique course in the splendour of the Ibaraki countryside. 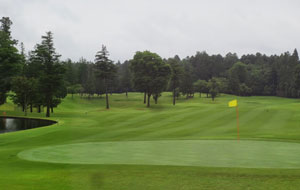 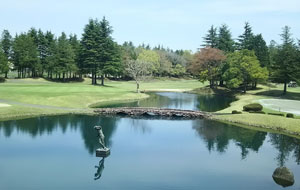 Chiyoda Country Club is a golf course owned and operated by PGM and is very conveniently located around 70 minutes from the centre.  The course is almost totally flat with very few elevation changes so the course is popular with lady golfers and seniors.

Although the courses are not hilly, that does not mean that it is easy as it is quite a strategic course requiring careful shot making.  It’s a 27-hole layout with three nines named rather unoriginally:  West, Middle & East. 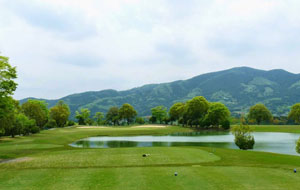 Country Club the Lakes is a very popular golf course in Ibaraki and certainly lives up to its name as you will encounter numerous water hazards and ponds as you negotiate the course.  There are 27-holes and the “new” nine is the obviously the most recent addition.

The challenges start immediately as your opening tee shot is across a lake with some respite on the next hole which has no water.  From here on you will have to cope with water on every hole – and on many of the holes, particularly the par 3’s there are large ponds guarding the green. The par 4, forth is worth a special mention with water all along the right from tee to green and around the back of the green creating an island.  The approach is especially challenging – play safe and you are in the water and over club and you will meet the same fate. 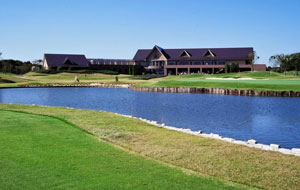 Katsuta Golf Club is a flat forest course near the Pacific Ocean and blessed with a mild climate all year round – its unusual for a golf courses in Japan because they use Bent grass which guarantees fast greens all year round.

A long par 5 to start your round – narrow fairways and a well-protected green at the main issue here. The third is a very pretty par 3 with two ponds fronting the green and several bunkers.  The fourth hole is rated the most difficult – mainly because its long so getting up in two for most golfers is impossible.  The ninth is also challenging with water both sides of the fairway as your approach the green.  Two very pretty par 3’s include the 13th and 15th, both of which have water in play.  A very long par 5 to finish – you will need three mighty blows to get on in regulation 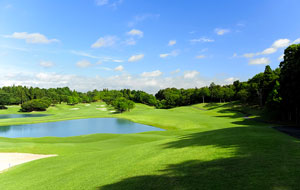 The course is located near Kasumigaura, which is just over 2 hours away from central Tokyo and boasts the second largest Lake in Japan. The 18 hole, par-72 golf course winds its way through native oak and evergreen forests with a number of lakes present throughout the course. Water does not really come into play on the front 9 holes, mainly featuring on the 2nd hole but once into the back nine water becomes a serious hazard. 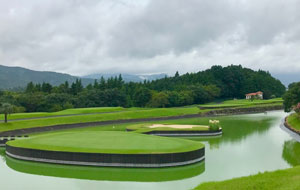 Segovia Golf Club in Chiyoda which is located in Ibaraki Prefecture takes its inspiration and its name from some of the famous Spanish courses and the whole place has the feeling of a Spanish Resort.

Another golf course with a lot of water and Desmond Muirhead has very cleverly sculpted the course close to and around the many natural water features.  The trouble really starts on the fourth hole with water all the way along the right from tee to green with a bunker also guarding the narrow landing area – a very challenging approach with bunkers left and right of the green and a long arrow-shaped bunker right in the middle of the fairway.  The fifth has water all along the right and the sixth has water both side with huge bunker complexes either side of the fairway.  The seventh hole is surrounded by water which also crosses the fairway and comes right up to the green which is also protected by huge bunkers. 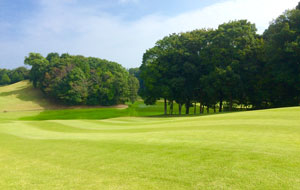 Created by course designer Mitsuaki Kobayashi and later renovated under the careful eye of norio Honma, Oarai Sherwood is a delightful course that can be enjoyed by all.

Measuring 6,506-yards from the back tees, the course is relatively short by modern standards and as such is a joy to play, especially for those not blessed with raw power.

The course is laid out across undulating land and enjoys stunning views out across the Oarai Harbour.

Beautiful manicured, lush deep green fairways are bordered by pristine white sand bunkers, native trees and the natural banking that is ever present in this area of Japan. 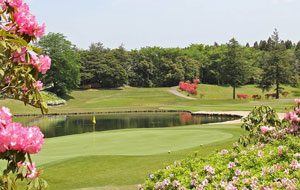 You must only travel 80 kilometres North East of central Tokyo in Japan to find one of the most highly rated golf courses in the country. The Golf Club Ryugasaki is an 18 hole, par-72 golf course and for those who do not have access to a vehicle, the golf course can be reached by travelling to the Sanuki station via the JR Joban line.

The Golf Club Ryugasaki was designed by Shunsuke Kato and opened for play in 1990. The course plays to 6,697 yards from the back tee but as with many golf courses in Japan you can play from a choice of four tee boxes on each hole. 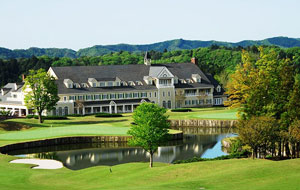 Windsor Park Golf and Country Club is as prestigious as the name may suggest to those visitors from the UK, who will not be disappointed with the British heritage that is present at Windsor Park G&CC.

The superb facilities at the country club begin with the incredible clubhouse, which true to its name is very British. Superbly designed and luxurious throughout the clubhouse offers golfers absolutely everything they could ned from large, spacious locker rooms to fine dining experiences.

The 7058-yard par 72 course is laid out across some highly interesting terrain and it is testament to the designer’s flair and imagination that Windsor Park Golf and Country Club is a premier golfing destination in Japan.