Tochigi Prefecture is also home to one of the largest shopping malls in the North Kantō region, called Bell Mall. This is situated in the central area of Utsunomiya City and is well worth a visit during Tochigi holidays. Here you will find a huge entertainment zone plus shops, restaurants and services.

Despite being a landlocked prefecture, Tochigi is a hugely popular tourist destination and often forms part of Japanese golf packages. The city of Nikko is one of the most visited areas in Tochigi Prefecture due to its famous Toshogu Shrine. The Nikko National Park boasts lakes, waterfalls, mountains, hot springs and wild monkeys. This makes it the ideal destination for hiking holidays in addition to playing golf.

Nikko plus the Okunikko area around Lake Chuzenji are known for their striking autumn colours and they're a great place to visit in late October and early November.

When booking golf Holidays in Tochigi, you have several excellent golf courses from which to choose including two designed by Pete Dye. The Pete Dye Golf Club Royal Course plays to just over 6,500 yards from the back tee but there are four different tee positions from which to choose. Narrow fairways are a major feature on this 18 hole golf course and the majority of the bunkers are situated around the greens. Water comes into play on a few of the holes including the par-3, 8th hole where the green is surrounded.

The second Pete Dye designed golf course in Tochigi is called the Pete Dye Golf Club VIP Course. You can reach this golf course in just over an hour from Tokyo and it opened for play in 1990. Playing to 7,000 yards, this is the longer of the two Pete Dye courses and it begins with a par-5 hole.

However, when booking Tochigi golf packages you are spoilt for choice with other options in the area including Taiheiyo Club Sano Hillcrest Course. The undulating fairways and water hazards in addition to the surrounding native trees make this golf course a special place to play in Tochigi. Other leading golf courses in the region include Nasu Kokusai Country Club, Prestige Country Club and Sun Hills Country Club.

Tochigi golf holidays would not be complete without a visit to an Onsen. Kinugawa Onsen is a great example and this is one of the largest Onsen resorts in the Kantō region. 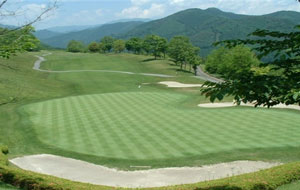 5 Nights / 4 Rounds
From: Yen 430,000
This tour combines two of Japan's best-known golfing regions and you will get to visit Ibaraki and Tochigi and play some of the best golf courses. Sun Hills Country Club is a beautiful course designed by Robert Trent Jones Jr. and it  . Read more...
Details