Osaka is a large city in the Kansai region of the Honshu Island in Japan. Although it is not the capital city of the country, Osaka City is the capital city of the Osaka Prefecture. This prefecture is one of only two urban prefectures in Japan, the other being Kyoto. There are two rivers which flow through the Osaka Prefecture and they are called the Yodo and Yamato Rivers.

Interestingly, despite the size of Osaka City, the prefecture was once the smallest In Japan. However, the construction of the Kansai International Airport, which is built on an artificial island, made it slightly larger than Kagawa Prefecture. The addition of the airport means it is now possible to travel directly to Osaka from several countries around the world including Canada, Russia, France, United Kingdom, Holland, Germany and Australia to name but a few.

This means it is easier than ever before to enjoy Osaka golf packages. you can fly direct to Kansai International Airport, making Osaka holidays a very tempting proposition.

There are several leading attractions in Osaka Prefecture including Universal Studios at Osaka's waterfront, Osaka Aquarium, Osaka Castle, Minoo Park, the bay area and many natural parks, such as Kongō-Ikoma-Kisen and Meiji no Mori Minō Quasi. These are the reason why so many people decide to book Osaka holidays.

When booking golf packages in this region of Japan, there is certainly plenty to do away from the golf course. However, you first have to drag yourself away from the golf courses and that is not always easy. Ibaraki Kokusai Golf Club is a good example and despite being set among a selection of fine trees, it is within a comfortable day trip of Osaka City. This Golf Club was established in 1960, making it one of the oldest in the region but it has recently enjoyed a complete renovation to bring it up to modern standards. You will find 27 holes of golf plus a newly opened clubhouse boasting a 270-degree panoramic view of Osaka City.

For those who would like to begin or end their Osaka holidays with a round of golf, Kanku Classic Golf Club is ideal. This golf course is located within just an hour of Osaka City and 20 minutes from Kansai International Airport. Two large lakes are the main feature of this golf course but there are also several ponds dotted throughout the 18 holes which add to the challenge.

Kansai Kuko Golf Club is another of the leading golf courses in Osaka Prefecture. It was established in 1995 and plays to just over 6,300 yards from the back tees. It is not a long golf course but features several water hazards plus some very large bunkers, making accurate shot placement important for a low score.

With many of the top golf courses in Osaka Prefecture being easy to reach from Osaka City, there are plenty of options in terms of accommodation. You will find all the leading brand names in the city and can choose from stunning 5 star hotels to smaller, traditional guest houses. 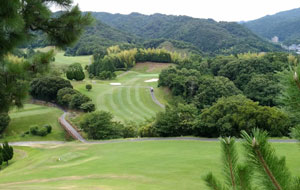 5 Nights / 3 Rounds
From: Yen 110,000
An ideal golf package for those who are also interested in taking in some of the unique culture on offer in Kyoto as we have left you one day to explore this ancient and beuatiful city with its narrow streets and iconic temples and gardens.. Read more...
Details